El Cajon Flamenco de Paquito Gonzalez is the ultimate method for this specific musical genre. Not only you will be able to understand and master the intricate beats of Buleria, Solea, Seguiriya, but you will have the chance to learn a great deal of variation and tricks from one of the best player of the scene, and see him performing with real Flamenco icons such as Vicente Amigo, Miguel Poveda, Joaquin Grilo, Bolita, Marina Heredia, and many more. As a bonus an amazing duet with Giovanni Hidalgo is included.Almost three hours’ worth of material that will inspire everybody, from beginner to professional.Awarded as Best Tuitional Flamenco Production in 2009 at Festival de la Union, one of the most important in Spain. 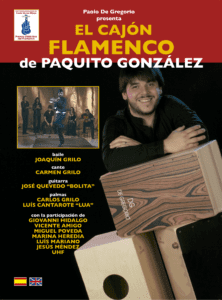