Amy MacDonald – This is the life

Scottish teen singer-songwriter Amy MacDonald has had a phenomenal rise to fame since appearing at this year’s Glastonbury and the summer festivals. Already heralded as the next KT Tunstall or Katie Melua, she posesses a talent way beyond her years, with an amazingly strong vocal, expertly-crafted songs and a traditional acoustic folk rock sound. Her debut single Mr Rock ‘n’ Roll topped the Scottish charts and went top 10 in the UK Singles Charts as did this debut album. This songbook includes all the songs from the album arranged for piano, voice and guitar and includes four pages of colour photographs. 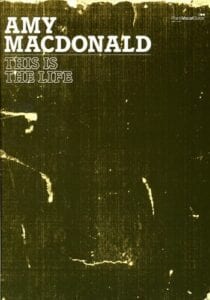 Je bekijkt nu: Amy MacDonald – This is the life €21,95
In winkelmand