The CD-S6 Ultima, apart from its impressive scratch feature, hosts many more impressive features that will appeal to virtually every DJ in the world. The CD-S6 Ultima has 8 built-in digital effects that are linked to the BPM counter to allow the DJ to ‘Beat-Sync’ the effects at the touch of a button, or the effects can be manually adjusted using the parameter time and the parameter ratio. The DJ can also overlay the effects one on top of the other to create even more effects.

The CD-S6 Ultima has a built in sampler that will allow the DJ to program samples that can be either used on their own (with or without the disc inserted) or used as an overlay on the music playing. The DJ can adjust a samples volume and pitch range separately from the music; these samples can also be saved to the player’s memory and recalled later when the sampled disc is inserted.

The large Blue LCD display gives a visual indication of the position of the CD in conjunction with the jog wheel when scratching. It also displays the pitch shift position, BPM, Time and buffer bucket (an indication of the anti-shock memory).

The Player has a wide range of control over the pitch with the option of ±4,8,16 and the ultimate 100%. It also has ‘Master Tempo’ allowing the DJ to lock the pitch of a track while being able to adjust the tempo. 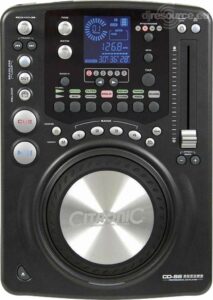